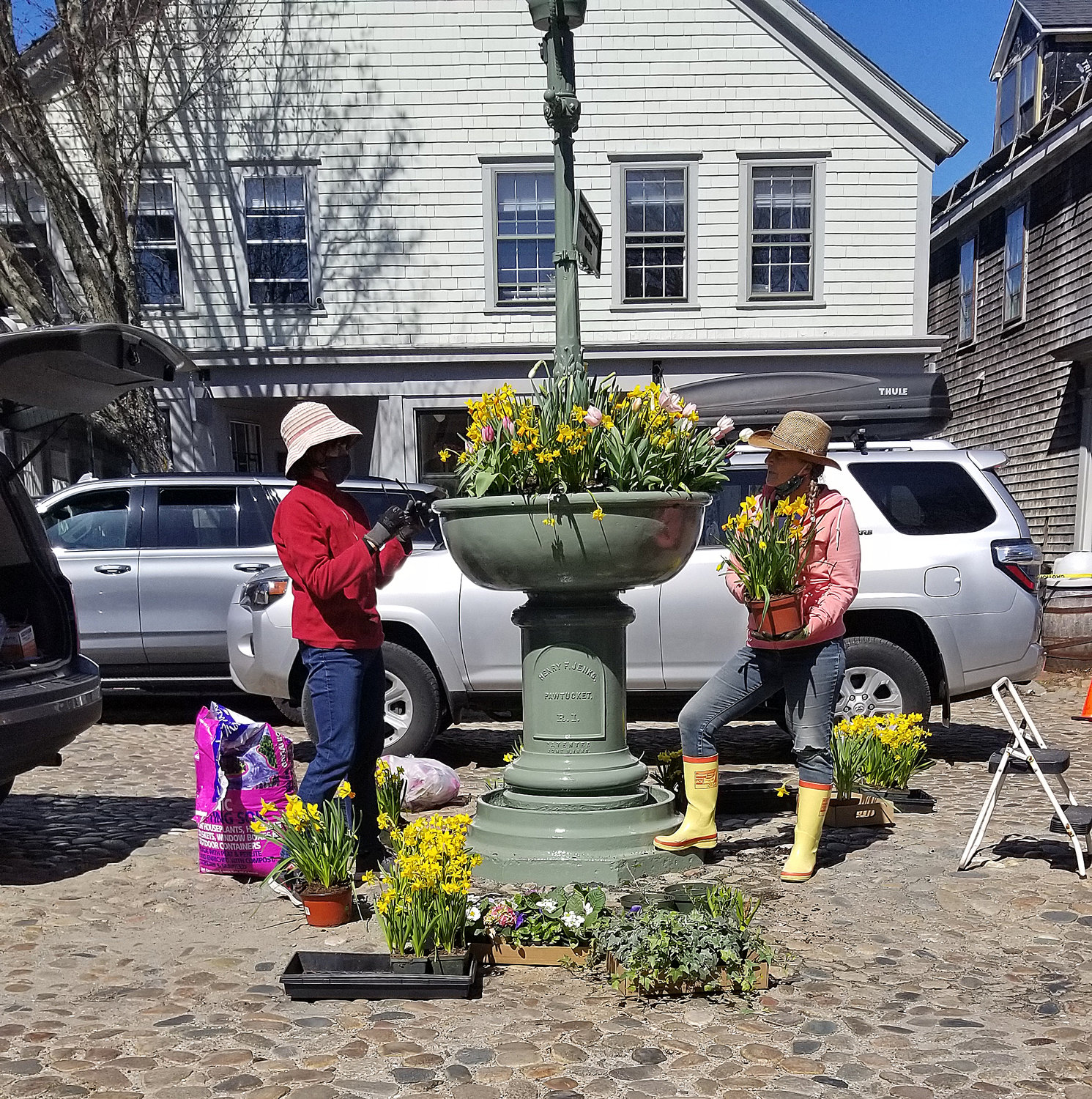 Visit to the Garden Club House on Wednesday

(July 28, 2022) The first family to settle at 90 Main Street in 1823 was that of Matthew Crosby, a wealthy whale oil merchant, who had it built for his wife Lydia Coffin and their four children. She died three weeks before the property was completed.

Crosby married Elizabeth Barnard Powell and they had 11 more children. Crosby raised 15 children at home and was known for his commitment to his family and his highly respected business ventures.

Fast forward 199 years and the Federal-style house is just one stop on the 66th Annual Nantucket Garden Club Home and Garden Tour Wednesday.

The walking tour includes five houses and three gardens along Upper Main Street and guides visitors through the long history behind the 18th and 19th century homes. The garden walls of a house were built with cobblestones that once stood in Boston’s historic Charles Street Jail.

“Some of the houses have been restored without regard to what it might cost. They had the wallpaper done exactly like the original house wallpaper,” said Cathy Ward, co-chair of this year’s tour.

Many homes have been maintained or restored to retain their original architecture, including doors, windows, flooring, and trim.

“It’s an incredibly unique situation for people to have access inside these historic homes,” Ward said.

The walking tour will also include tea and homemade cookies in the garden of the Nantucket Historical Association’s Hadwen House, which has been recognized by the Smithsonian Institute as a historic garden.

The mission of the Nantucket Garden Club is to foster interest in and knowledge of gardening, plants, flowers and horticulture and to encourage conservation initiatives on the island, Ward said.

“The club works well with other organizations on the island, for example those concerned with port security, climate change, fertilizer issues and things that affect this island from a conservation perspective” , said tour co-chair Caroline Tucker.

Money raised from the annual tour is also donated to other non-profit organizations on the island such as the Madaket Land Trust, Maria Mitchell Association, Nantucket Biodiversity Initiative, Nantucket Community Garden, Nantucket Cottage Hospital, Nantucket Land Council and others.

The club maintains the Hadwen House Gardens, the Max Wagner Fountain on Main Street, and several other locations around the island.

It also hosts an event called Art in Bloom, in which the club works with island art galleries. The gallery chooses a work of art and a flower arranger from the club will study it to create a flower arrangement that represents their floral interpretation of the work. It is then displayed in the gallery or outside the gallery to entice customers to enter.

“So much the Garden Club does is help the island’s economy and pollinate so to speak. . . it’s not just a bunch of old ladies getting together for a conference,” Ward said.

The club recently removed the garden from the Saltmarsh Senior Center to replace it with native plants that will survive the rising winter tides. The club also hosts the CommuNity Daffodil Flower Show in April. The annual show invites all members of the community to enter their daffodils the next year.

Nantucket Garden Club House and Garden Walking Tour, 11 a.m. to 4 p.m. Wednesday, August 3. Upper Main Street. Tickets will be available for purchase at any house along the tour and visitors can travel at their own pace and can go to each location in any order. Tickets are also available online at NantucketGardenClub.org.

Look inside Lakewood on the 2022 Lakewood House Tour