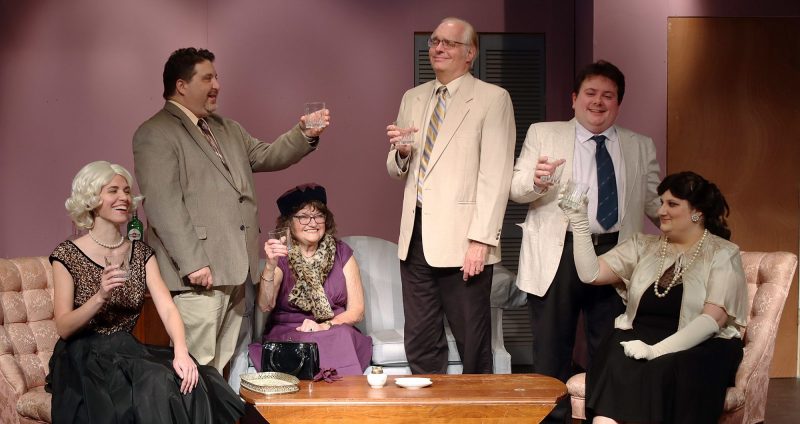 Topher Payne’s “Perfect Arrangement” is a strange little piece. Cheerfully disguising itself as farce and easy comedy at its opening, it descends dramatically into a tangled mass of tragedies and “question game” detritus at the end. Albany Civic Theater’s current production of the play is not without merit, offering light humor, strong characterizations, and clean storytelling. But the subject is viscerally upsetting. And probably more today than when the play was written just ten years ago.

In 1950 Washington, DC, Bob (JP Lurie) and Millie Martindale (Samantha Miorin) form the perfect young couple. Bob has a great job working for the State Department and Millie is a housewife working to perfect the best Jello mold possible while keeping her skin soft and her fridge defrosted. Next door live their best friends, Jimmy (Ryan Palmer) and Norma Baxter (Amy Daisak).

Jimmy teaches at the school and Norma works with Bob at the State Department as a secretary. They too share their friend’s aspirations to join America’s middle class as blue ribbon winners.

However, there is a catch. Couples are not what they seem. Bob and Millie, Jimmy and Norma are gay. Bob is actually partnered with Jimmy and Millie shares Norma’s bed. The four have come to a “perfect arrangement”, posing as two heterosexual couples who live next to each other in two separate apartments…connected by a secret door in the hall closet. Everything seems “normal” until this perfect arrangement is threatened by the State Department’s initiative to purge the agency of homosexuals – a purge ironically led by Bob – and the unwanted arrival of a ghost from the past. of Millie.

Despite its historic setting, Payne’s play is still relevant today. (And, no, I’m not referring to the quest for the perfect Jello mold recipe). The movement to restrict the rights of Americans based on sexuality, race, or gender, a battle that raged then, rages today and still plagues our nation more than 60 years later drops heavy dark fog in the evening.

Despite the disaster, all the actors do a good job of easily handling the humor and wild swings in the melodrama. Bill Daisak and Laurel Hayes are brilliantly clueless as Bob’s boss and his wife, Kitty, Hayes wisely never overplaying the ditz. Rita Machin, as a woman from the past, is delightfully brazen and plays her blackmail card with just the right amount of flourish. The couples, whatever their configuration – gay or straight – are believable and real. Kudos to the four, as well as director John Quinan, who keeps the pace brisk and the melodrama firmly under control.

Director John Quinan and his cast have done a fine job with a disturbing story. It’s a piece that will cause some discussion when you get home, and that’s a good thing.

The playwright said he wrote the play to bring to light a “lavender story” that needed to be heard, discussed and remembered. Pleasant. But it is painful to see the hope and optimism of these people in the past, while we sit here in the future, fully aware that their self-sacrifice and demand for change is still slow in coming.

More from The Daily Gazette: