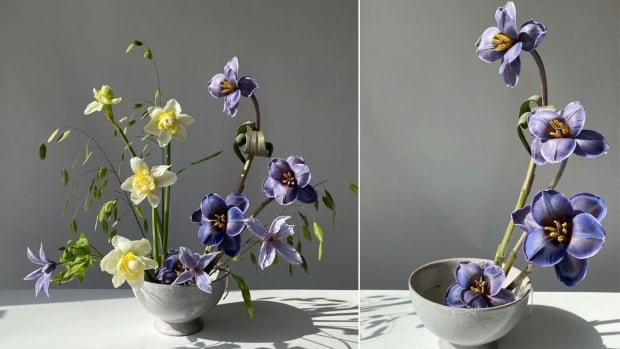 The ideal vase for every type of flower arrangement

There are no hard and fast rules when it comes to flower arrangement. But if you’ve ever had trouble arranging a bouquet at home, the problem might just be with the vase you’re trying to use.

“[The vase] is often an afterthought for people, but in reality it dictates the whole arrangement – the shape, the style,” said Jennifer Fowlow, owner and creative director of Toronto’s Wild North Flowers. Using the right size and shape container can make it easier for you to create certain types of arrangements and better showcase the flowers and greenery you have on hand.

To help you choose the best vase for an arrangement—or which flowers will look best in a vase you already have—we asked Fowlow to share some of her tips.

There’s no need to purchase a specific vase, of course, and Fowlow lists many items you can use instead of a vase in a pinch: empty wine, water, or liquor bottles interestingly shaped can replace tall vases, while bowls or sugar dishes can function as low dishes. But if you’re considering investing in a container, she suggests choosing a tall, classic vase that’s at least 10 inches tall with an opening three to five inches wide.

Fowlow also recommends using a flower frog to stabilize arrangements in a low bowl with a wide opening or airy arrangements that don’t require a lot of stems. Available in a range of materials, including glass and metal, flower frogs help hold stems in place at a specific angle and can be found at arts and crafts stores, online, and even in stores. thrift stores. Although their designs vary, many are interpretations of the kenzan, a needle-covered metal device used in ikebana, the Japanese art of flower arranging. “We put some putty on the bottom [of flower frogs] to hold them to the vase,” Fowlow said.

When using a vase with a very wide opening, the risk is that the stems bow outward around the edge of the vase and you end up with too much empty space. “The smaller the opening, the less product you’ll need to make it look full, and the more control you’ll have over stem placement,” Fowlow said. When aiming for an arrangement with asymmetry and/or negative space (intentional gaps), vases with a smaller opening also facilitate this goal.

Fowlow is a big fan of bud vases with an opening of an inch or less – although she noted that they might not work for thick-stemmed or heavy-headed blooms. She’s also a fan of vases with “negative space within the vase itself”, noting that these don’t require a lot of stems for effect, with the container adding to the architecture of the arrangement. Shaped like circles, arcs, and semicircles, these vases usually don’t hold much water and contain only a few fresh or dried stems. “It’s really great for people who just want to bring in some beautiful flowers from their garden,” Fowlow said.

When choosing a vase, you should also consider how much water it can hold. “[With] tulips and a lot of these spring flowers that have really thick stems, they drink a lot of water,” Fowlow said. She recommends a medium-sized bowl-shaped vase or something with a soft, round shape that will complement the natural curves. Fowlow noted that while a wide but shallow container can hold a lot of stems, it may not hold a lot of water and therefore will need refilling more often than you might think.

You also need to make sure your flowers have enough room to move around in the vase. Some flowers like tulips will continue to grow after being cut, Fowlow said. “Take that into account when you organize them,” she said. “Staggering their height, giving them plenty of wiggle room – all of this will help prevent flowers from being smothered and squashed together.

According to Fowlow, containers with large openings, like the glass cylinder vases you may have saved from past floral deliveries, can be more difficult to use at home. “They’re not ideal unless you have, say, a whole bouquet already arranged,” she explained. “You need greenery to support the other flowers.”

“[A] the water pitcher can be nice,” she said, as long as you consider the wide mouth, which makes them more suitable for “pretty fluffy flowers.”

When working with wider-mouthed vessels, Fowlow recommends using a flower frog, a grid of tape placed over the opening, or a mesh ball if the vase is opaque. These tools allow you to create a solid arrangement that looks “rather nice and airy,” she said, adding that a ribbon grid is especially great for adding structure. “You don’t need to stuff [the vase] with so much greenery and product…because the ribbon helps hold the shape of the arrangement. The same goes for a low bowl with a very wide opening. peonies” and create a kind of “floral cloud”.

“Generally, the height of the vase should be about a third of the height the flowers are going to be,” Fowlow said. This also applies to the organization of the branches. “If you have a big branch, you obviously need…a ship that’s tall enough so that it looks proportional and not too heavy. And you also need it to be weighted.” If the container is not strong enough, putting stones in the base of the vase can prevent it from toppling over.

Tip: always take a step back

As you make an arrangement, be sure to look at your work from different angles and distances. “[When] we design or teach people in in-person workshops, we always get them to, like, put something in there and then step back and look at it as a whole,” Fowlow said. “When you’re up close , you can’t see the whole picture. You can’t necessarily see how the shapes should go.”

Truc Nguyen is a Toronto-based writer, editor and stylist. Follow her on @trucnguyen.