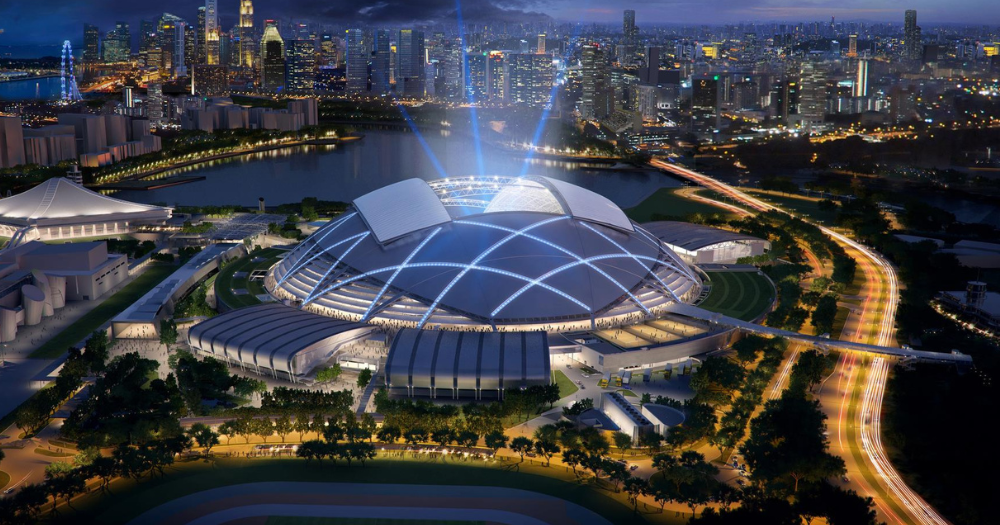 On June 10, the government announced its decision to take over Sports Hub Singapore from Sports Hub Pte Ltd (SHPL), which was previously under a public-private partnership (PPP) agreement.

Termination of the deal, which was originally a 25-year contract started in 2010, would allow SportSG to gain more control and flexibility over the Kallang facility and make it more accessible to the public.

On the day of the announcement, Culture, Community and Youth Minister Edwin Tong said the takeover would take Singapore’s sporting and lifestyle ambitions “to a new level”.

As the Sports Hub is an “iconic national sporting asset” and the “home of Singapore sport”, it also intends for it to offer more community sports programs and school events, and be open to Everyday Singaporeans.

On August 1, in a ministerial statement to parliament, Tong gave more details on the reasons for the termination of the PPP.

As he previously mentioned in his Facebook post on the day of the announcement in June, the takeover was due to a “confluence of several reasons.”

Tong shared that first, the arrangement “fails to promote sufficient community vibrancy” at the Sports Hub.

The arrangement with SHPL has succeeded in making Sports Hub a world-class sports facility that has won international awards for its design and hosted major international events such as the International Champions Cup and BTS and Coldplay concerts.

However, it “did not do well” when it came to promoting and enhancing the vibrancy of community sports and lifestyle activities at the facility.

“The quality and volume of its events and programming schedule has not lived up to what we had envisioned, even taking into account the private sector interest in this project.”

Other than the Super Rugby event held from 2016 to 2019, SHPL has not secured any recurring or marquee sporting events at the Sports Hub on a multi-year basis.

More importantly, Tong said the government would have liked to see more grassroots and school events held at the Sports Hub, even though those events might not have any commercial return.

Instead, the deal with SHPL was more profit-oriented. This might have worked well during the construction phase of the project, but “was not sufficiently aligned in the current phase of the project”, which places more emphasis on community programs.

Tong cited an example where SportSG encountered resistance to setting up community sports programs such as the ActiveSG academy programs because these did not generate revenue.

Due to the nature of the project conditions, the costs of hosting school sporting events would also have to be borne by the schools themselves.

The government felt it would be too difficult to adjust the deal’s key performance indicators, and that it would be more efficient to end the PPP altogether and take over “on a clean break basis”.

An integrated sports and entertainment ecosystem in Kallang

The government plans to make the Sports Hub more accessible to Singaporeans by planning events such as regular Sports Hub Open Days. SportSG is also working with the Ministry of Education (MOE) to host more national school games there.

These plans will be complemented by current plans to develop the Kallang area around the Sports Hub into a larger sports and entertainment centre.

Dubbed Kallang Alive, the 89ha site will be transformed into a vibrant sports, entertainment and lifestyle district by 2030.

Under this plan, sports facilities around Sports Hub – such as Kallang Football Hub and Kallang Tennis Center – will be expanded, developed, owned and operated by SportSG.

Tong shared that the vision is to transform the entire Kallang Alive compound, including the Sports Hub, into an integrated ecosystem that can:

2) be a home ground for national athletes to train and compete;

3) be the heart of community, grassroots and school sports and;

4) be a test bed for innovation and growth in the sport.

The third reason cited by Tong for the acquisition of the Sports Hub is the maturation of the wider sports and entertainment ecosystem in Singapore.

When the government first announced plans to redevelop the National Stadium into the current Sports Hub in 2003, Tong admitted he did not have the expertise to turn the Sports Hub into the state-of-the-art facility. he was meant to be.

This is the reason why the PPP arrangement was agreed instead of a traditional method of procurement where the government pays the capital up front and manages the project on its own, or asks a service provider to do.

“So in addition to needing market-leading experts who not only had the right technical expertise to build the infrastructure, we also needed someone’s experience and connections with international networks of sports and entertainment.”

Since then, Singapore’s internal capabilities in this sector have grown and businesses here have matured.

The demand for large-scale sporting, lifestyle and entertainment events has also increased.

Tong concluded that taking over the Sports Hub was not a quick and easy decision, but the result of various factors.

“Overall, the limitations of the current arrangement, the changing environment and our growing abilities and ambitions are all factors we considered when deciding to end the relationship. And I would add that it was not a decision taken lightly. We felt that, however, after doing due diligence, as I explained at the beginning, and a confluence of all these factors in the ecosystem coming together, the time had now come for the government to exercise its right to step in, take over and continue running the Sports Hub.”

Tong revealed that a team of SportSG officers will soon move into the Sports Hub holding company to run the facility full-time.

Existing SHPL employees will also be retained and have the option to join the new Sports Hub company.

Going forward, the government will continue to work and partner with the private sector in the areas of programming, broadcasting, hosting, maintenance and facility management.

The current contractual model will therefore be retained, which would allow Sports Hub to work with “optimal and market-leading partners to provide the best services and facilities”.

In the medium to long term, the government also intends to engage the private sector to explore prospects for redevelopment of parts of the Kallang Alive compound.