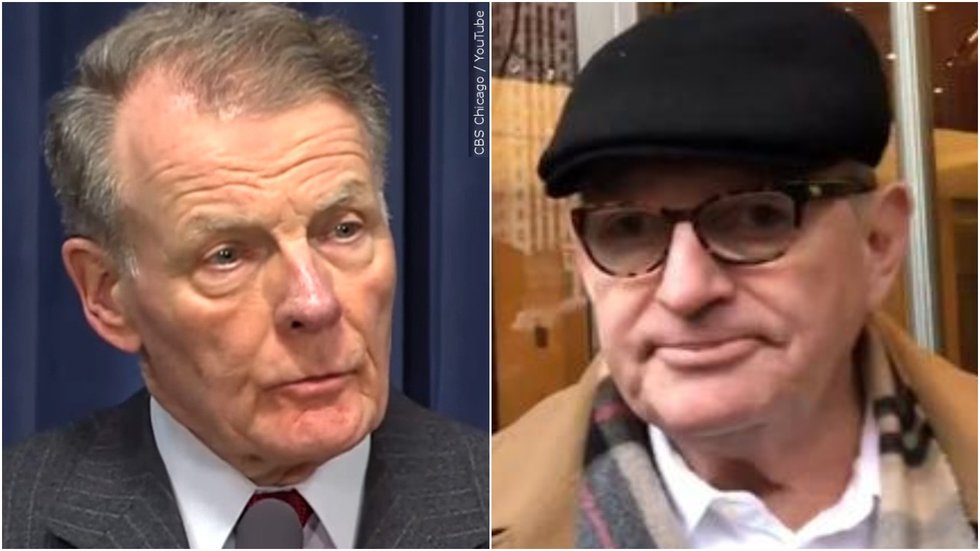 Madigan has always denied any wrongdoing in the plan to help Kevin Quinn after Alaina Hampton sued his political organizations in 2018 for alleged sexual harassment.

But this unsealed affidavit shows that Madigan spoke with McClain on August 29, 2018, about ways to get several lobbyists to make monthly payments to Quinn. The document shows that McClain had four or five people ready to contribute payments for the next six months. McClain had asked Madigan if he wanted to talk to someone or stay out of the situation.

“I mean, whatever you want,” Madigan said. “Yeah, I think I should stay out of it.”

FBI Special Agent Ed McNamara wrote that Madigan told McClain he wanted to be able to appear as if he had no knowledge of the arrangement for the payments to Quinn.

It was just one of many calls from the FBI before they got a judge’s approval to search McClain’s Quincy home for more evidence in 2019. The document shows the FBI field office in Chicago had conducted an extensive public corruption investigation involving Madigan. and McClain for several years.

Federal prosecutors charged the pair with racketeering and bribery earlier this year. This affidavit explains prior evidence showing that Madigan, McClain and certain officials at ComEd and Exelon were aware of the illegal nature of their payments for legislative actions. Investigators believe this is why the group used third parties to “distort and conceal” the source and purpose of the payments.

March 2 indictment states Madigan conspired to solicit and exact jobs, contracts and other bribes from Commonwealth Edison in exchange for his guarantee to pass favorable bills for big business of public services. Madigan is charged with racketeering conspiracy and using interstate facilities to aid in bribery, wire fraud and attempted extortion. McClain, a Quincy native and close confidant of Madigan, is also charged with racketeering conspiracy and using facilities to facilitate bribery and wire fraud.

Throughout the time that the FBI tapped McClain’s personal cell phone, federal investigators gathered evidence that McClain had asked ComEd and Exelon to appoint Juan Ochoa to the board and forced ComEd to perform payments to several Madigan associates through these third-party lobby groups.

The affidavit records a May 2, 2018, phone call, in which McClain and Madigan spoke at length about Ochoa’s possible nomination. Madigan had asked McClain how much ComEd paid board members. The Quincy native noted that it would be $78,000. Madigan was then heard laughing before saying he could make the appointment.

“I mean, he makes more money now than he ever would in his life and his hand still shakes when he writes a check,” McClain said with a laugh. “In his head, he is still poor.

“Yeah. Mike, I would suggest that we continue to support [Juan]“, said Madigan.

“But keep me posted on the extent of the pullback,” Madigan added.

Fast forward to Feb. 19, 2019, when Madigan called McClain to verify Ochoa’s nomination process. The former president asked if there was still a delay for Ochoa, although McClain explained that he was already approved.

“They informed everyone who leaves the board, who comes on the board, and so now they say, what is her name? Anne Pramaggiore [former ComEd CEO] told me she knew first,” McClain said.

McClain then asked Madigan if he should make a confidential call to Ochoa about the date. Madigan explained that would be fine and provided McClain with a phone number.

“Yeah, I’ll call him. That way you kept your word that you didn’t call him.

“I’m just going to tell him it’s confidential. Everything is fine,” McClain said.

Ochoa will later become a board member in April 2019.

McClain and Pramaggiore are due to appear before a jury for the bribery scheme on Sept. 12 along with former ComEd lobbyist John Hooker and former City Club president Jay Doherty. Madigan’s four allies were charged with corruption and wrongdoing in ComEd’s 2020 deferred prosecution agreement.