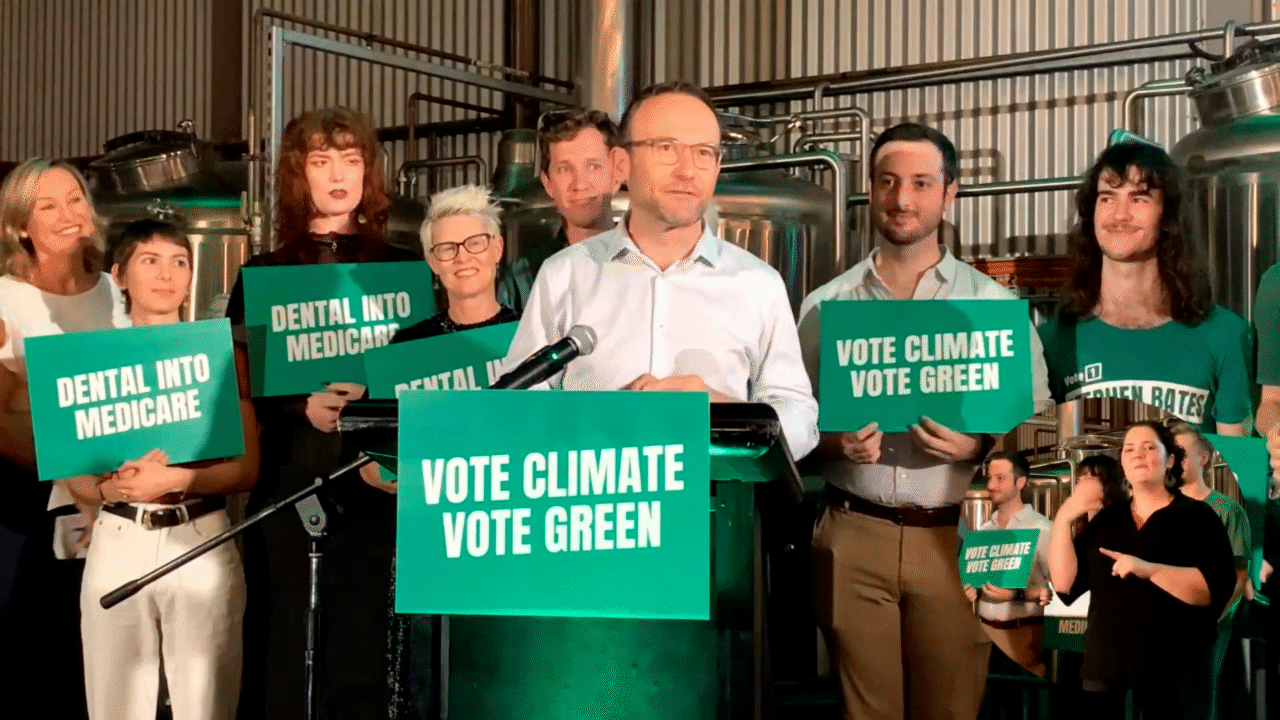 In their campaign launch on Monday evening, the Greens again stressed that their overriding ambition was to establish a power-sharing deal with a Labor government after Saturday’s federal election.

The event summed up the Greens’ abandonment of any semblance of opposition to the big parties. Their whole rhetoric, to big business and the political establishment, is that the Greens are a “responsible” party, committed to consolidating the faltering parliamentary order under conditions of mass popular disaffection and fears within the elite. ruling that the election results in a hung parliament or a weak minority government.

Even the timing of the event was remarkable. Like the Liberal-Nationals, the Greens waited less than a week before Election Day to launch their campaign.

Indeed, under Australian electoral law, campaigns of parties with parliamentary representation receive substantial public funding before their official launch. Like the Conservatives, the Greens used undemocratic laws aimed at ensuring the dominance of establishment parties.

On launch day, the Greens listed seven policies they would present to Labor as the basis for a coalition government. Nowhere are the policies described as non-negotiable demands. In the Greens statement, they are instead referred to as “requests”. The media widely called them a “wish list.”

There is no “red line”. Everything is on the table for the backstage haggling. As the Greens’ statement stated, the seven points formed the basis for “negotiations in the likely event of a minority parliament”. The party would simply “suggest” them to Labor and “push” for their implementation.

The seven points underscore the politically cynical and rotten character of the Greens’ attempts to win the support of disaffected workers and youth. Among young people in particular, there is widespread anger at the refusal of Labor and the Coalition to implement policies to tackle climate change, or rising inequality and a growing social crisis.

In their official platform, the Greens call for a transition to net zero carbon emissions by 2035 at the latest, a substantial increase in taxation of billionaires and big business, major funding for education and free public health care, the halving of the defense budget and a host of other “progressive” policies.

But the seven points demonstrate that this program is a facade, aimed at winning votes. It has nothing to do with the underground maneuvers of the Green MPs or any other aspect of the party’s activities.

This was more or less acknowledged in the Greens’ statement calling for a coalition with Labour. The party would “still campaign on its overall plan”, but “the fully funded shortlist represented a starting point for discussions in a minority parliament and also signaled the priorities of the party when exercising the checks and balances in the Senate in a minority or majority parliament”.

An incredibly lean shortlist. The only reference to climate change, the raison d’être of the Greens, is a call for “no new coal and gas mines”. Even if passed, this policy would do nothing to reduce Australia’s existing emissions which, on a per capita basis, are among the highest in the world.

Amid a collapse of the healthcare system, most clearly expressed in the public hospital crisis, all the Greens would advocate is the extension of state-subsidized health insurance to dental and mental health treatments.

The cost of living is skyrocketing, with inflation pushing millions of workers to the brink of financial ruin. But all the Greens are proposing is the construction of a million new ‘affordable’ homes, not even an expansion of social housing, the introduction of rent controls or any measure to deal with the skyrocketing mortgage repayments under rising interest rate conditions.

The Greens are also calling for free childcare, a proposal put forward by business sections to ensure parents are pushed into low-paying jobs, and for the ‘erasure’ of student debt, but not to the abolition of tuition fees or the introduction of free education. The Greens’ policies include an increase in unemployment and other sub-poverty benefits, but say nothing about the need to raise the minimum wage or the wages of any other section of the working class.

To drive home their “fiscal responsibility,” the Greens boast that their seven-point plan would result in almost $10 million in “net savings to the budget.”

Even the seven-point platform is fanciful and the Greens are well aware that there is no prospect of it being implemented by a Labor government.

Labor leader Anthony Albanese has pledged to allow new coal mines to open and has rejected any increase in unemployment benefits. Labor is seeking to outflank the coalition from the right, presenting itself to big business as the best way to implement sweeping social spending cuts and step up restructuring in favor of business.

Despite all this, Greens leader Adam Bandt proclaimed, “The Greens will kick out the Liberals and keep the job on track.

The deceitful and pathetic character of these claims was summed up by the Greens’ cost statement. “The party has also suggested revenue proposals to pay for its measures which it thinks Labor could adopt, all measures aimed at making big business and billionaires pay their fair share of tax and none at increasing the incomes of the ordinary citizens,” he said.

The Greens will “propose” to Albanians to raise taxes on businesses and billionaires. He will decline the suggestion and the Labor-Green coalition will continue.

This is not a hypothetical question. The Greens statement boasts that “Adam Bandt and the Greens were at the heart of the Gillard minority government…” Elected in 2010, he was kept in office through a formal agreement with the Greens for almost three years.

The Greens point to the limited expansion of dental coverage for children by the Gillard government. They leave aside the wider record of their last de facto coalition with Labour. The Gillard government kicked 100,000 single parents off their benefits, introduced sweeping cuts to health care and education, and intensified the persecution of refugees.

He supported the US-led witch hunt against Julian Assange, an Australian journalist, for his exposure of US war crimes in Iraq and Afghanistan, as it deepened Australian involvement in these predatory, neo-colonial wars. The Green-backed government has engaged in a troop surge and “counter-insurgency” operations in Afghanistan, leading to new war crimes.

He aligned Australia with the United States’ “pivot to Asia”, a vast American military build-up in preparation for war with China. When Barack Obama announced his plans for confrontation and conflict with China from the floor of the Australian parliament, Bandt and former Greens leader Bob Brown were among the first to shake his hand and flatter the US President of the ‘era.

Notably, the Greens’ seven-point program says nothing about war or foreign policy, nor was it mentioned when the campaign was launched. This, under conditions where Labor and the Coalition have pledged to spend more than $600 billion in military spending over the decade, and Albanese presents Labor as the party best placed to deepen the frontline role of Australia in the US war campaign against China.

The silence is a clear sign that the Greens have embraced Labour’s belligerent and militaristic policies as their own. The Greens have previously promoted the anti-China campaign and supported the US-NATO proxy war against Russia in Ukraine, including Australia’s supply of arms to Washington’s puppet government in Kyiv. and its associated fascist paramilitaries.

The Greens have also dropped any mention of the coronavirus pandemic, as bipartisan “let it go” policies claim more than 40 lives every day and result in 50,000 or more daily cases. Like Labour, they pledge to “keep the economy open”, to secure corporate profits regardless of the consequences in terms of illness and death for workers.

The Greens are a right-wing capitalist party, rooted in sections of the affluent upper middle class. Workers and young people who want to fight war, inequality, COVID and the assault on social conditions should reject the bogus campaign rhetoric of the Greens with the contempt it deserves, as well as the fraud that a government Labor-Greens would represent any alternative to the Coalition.

Instead, they should turn to the socialist and internationalist perspective advanced by the Socialist Equality Party, which rejects the whole framework of parliamentary bargaining and fights for the independent interests of the working class.

The working class must have a political voice, which the Australian ruling class seeks to stifle with this legislation.

Tour of the Heritage House 2022 online