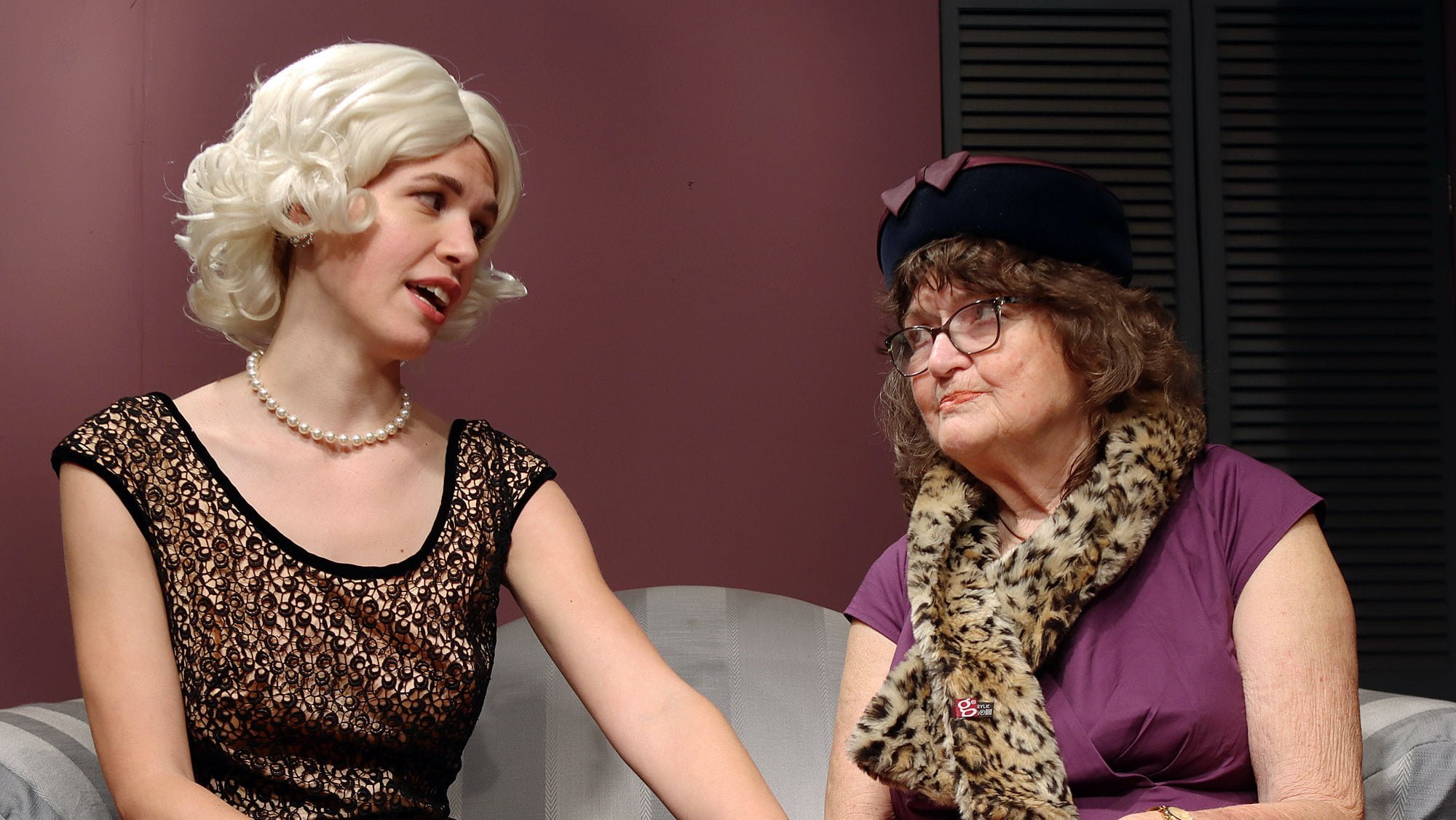 ALBANY – Albany Civic Theater has a long and storied history in the Capital Region. Getting back inside the venerable grande dame of the region’s community theaters was a treat in many ways. So many theatrical ghosts have come from the past to welcome me back to a space I haven’t been in too long. Photos from productions of the past 40+ years have brought back many memories of long-dead actors, regaled productions from the annals of history. It was in many ways putting on a pair of old, well-worn slippers…comfortable and comforting. That was the sentiment I hoped to find with current ACT production Topher Payne. Perfect layout.

It plays like a simple farce with a classic plot. We are in 1950, the beginnings of the era of Mad Men, and two Washington, DC couples, the Baxters and the Martindales, are in a “perfect arrangement”, pretending to be straight neighbors when in reality, they are a pair of same-sex couples. Jim Baxter lives with Bob Martindale and Norma Baxter is with Millie Martindale. Bob works for the State Department and Norma is his secretary. They’re tasked by Bob’s boss to ferret out the sexual deviants in the department…gay people…expose them, then fire them. An interesting dilemma for a closeted homosexual and his lesbian secretary, who share public marriages of convenience. Inspired by the early seeds of America’s gay rights movement, this show should read as a twist on ’50s sitcoms like Ozzie and Harriet, i love lucy and I married Joan.

Director John Quinan did his best to infuse the cast with this classic line-reading, almost by heart, with somewhat over-the-top sincerity. Characters often break the fourth wall to assault the audience, as if to say “I’m in on the secret”. In fact, sometimes the lights go out and the actor leans into the audience to deliver an advertisement for a product used in the play. The men use the upstairs closet to escape to their apartment enough times that the metaphor of getting in and out of the closet (literally and figuratively) gets a bit heavy.

Unfortunately, the problem with this production lies in its casting. They stumbled over a lot of lines on opening night (maybe we can crack this down to opening night nerves). More importantly, they don’t seem comfortable in the shoes of their characters. They are all embarrassed by the affection the two men and two women show for each other in their private moments. It feels contrived and forced, which makes it uncomfortable for audiences to watch.

JP Lurie returns to the ACT scene as Bob Martindale, the most complex character, who must balance trying to do the job he’s been given and taking a stand for his own life and beliefs. Ryan Palmer, as Jim Baxter (Norma’s husband and the other piece of the swap quartet), though a newcomer to the ACT scene, is a veteran of the area’s theater scene and the most comfortable in his role. Its comedic timing brings the otherwise somewhat stoic production to life.

Rita Machin is Barbara Grant, whose character is alluded to throughout the play and has a connection to Millie Martindale’s past. She has a wonderful speech towards the end of the second act that really should have knocked the house down. Unfortunately, the stumbled lines stifled his performance. Samantha Miorin (Martindale) and Amy Daisak as Norma are the two most comfortable performers on stage, but their dramatic moments also fall short.

Rounding out the cast are Bill Daisak and Laurel Hayes as the boss and his wife. Daisak plays the stereotypical stalwart conservative, anti-communist, anti-gay of a certain era, who sees the world as white bread and then everything else. Hayes delivers the most comedic relief as the easily swayed and redirected Kitty who is iconic of the era; the devoted housewife who is happy to only have to worry about what the housekeeper cooks for dinner, and let’s not look too closely at the world around us and rock the boat.

Scenographer Peter Kantor has created a charming salon à la i love lucy which sets the tone for this 1950s madness. Nicky Lightz’s lighting adds wonderful moments, especially when the characters step out of their roles to deliver their commercials.

In all, Perfect layout is flawed by its performance. The piece offers some very thought-provoking questions and a look at a slice of life in the 1950s. It’s also a very strong and insightful look at all that has changed over 70 years later…or, perhaps, little change.
Perfect layout runs Fridays, Saturdays and Sundays through November 20 at the Albany Civic Theater, 235 Second Ave. For schedules and ticket information, call 518-462-1297 or www.albanycivictheater.org.

The art of flower arranging